Tea is a very popular drink in Japan. There actually exist so many kinds of tea that it is as tough to know them all as to know all Belgian beers! Here are some kinds of tea I have discovered:

Ban-cha 番茶, a tea of medium quality, which is made of the tea leaves collected after the first quality leaves (the first tea ichi-ban cha and the 2nd tea ni-ban cha); this is where its name comes from.

Matt-cha 抹茶, the green tea powder that is used during the tea ceremony, but also in pastries, cookies or ices. 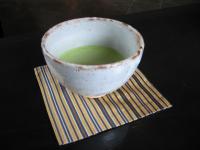 Mugi-cha 麦茶, “wheat tea”, that is often drunk cold in the summer.

Oolong-cha 烏龍茶, a tea originally from China, widespread in Japan.

Well… hem, the topic of japanese tea is so wide that, to avoid getting lost, I prefer to let you taste it and enjoy it by yourself!