Manga. Is it still necessary to present the famous japanese comics? Read by millions of people in Japan (and abroad), and translated in many languages, the manga comics have their own artistic and literary style.

The word manga 漫画 actually refers to both a comic strip and the cartoon. Many manga strive to create an atmosphere, rather than trustfully represent reality. 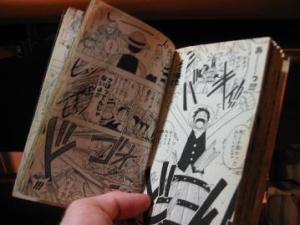 Onomatopeas or noises covering the pages are often difficult to translate (it is as if they were part of the scenery, which is why they are often left untouched in translated versions). Also, as every traditional japanese book, manga start from the right (I’d say on the “wrong” side!), and in the beginning, it is not easy to figure out the order of the frames (in other words, if you try to read a manga like a western comic, no doubt you won’t much understand the story).

While manga are not always very clever, they can be helpful to learn Japanese. You will find many manga displaying the pronounciation for each kanji (furigana), which makes it easier to lookup words and extends ones vocabulary…