Probably not necessary to introduce them. Sushi (寿司) are made of a thin slice of raw fish, delicately layed on a small brick of rice. The rice used to make sushi is prepared by adding a mix of vinegar and sugar to freshly cooked rice, which makes it sticky and gives it a particular taste.

Although the basic elements are always the same, their is a great variety of sushi. 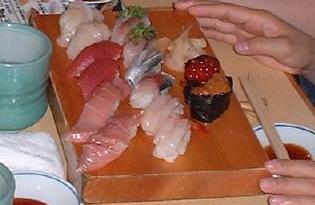 First of all, because the number of species of fish present in the Japanese seas and around is impressive, but also because their are many ways to prepare them: rolled and wrapped in dried seaweed (maki-zushi, 巻寿司), with a little wasabi, or a little herb or leaf.

Unlike some people think, sushi are not appetizers, nor even a starter, but are often taken as a full meal, and believe me, it doesn’t leave you hungry. 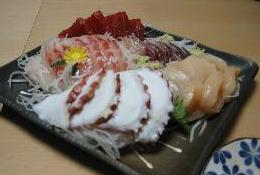 Now, what about sashimi? It is how we call the raw fish itself, finely cut and eaten like that, with a little soy sauce.

Not confident about raw fish? It’s understandable when one is not used to see really fresh fish. But, I can tell you, Japanese people are extremely careful about the freshness of the fish they serve. So, just try it: you won’t be disappointed!