In 1853, commodore Perry, sent by the american government, 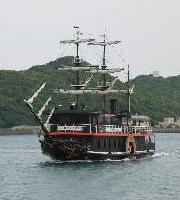 barges into the bay of Shimoda (下田, see also: Izu), with his seven black ships (kuro-fune 黒船). His purpose? To negociate with Japan, to allow trade with the United States.

Perry and his men, arrived without guns and heavy loaded with presents, are very welcomed by the japanese, and comes out of these negotiations a “Friendship Treaty” in 13 articles, giving right to the americans to trade with Japan in the city of Shimoda (later, the treaty was revised, to allow access to Yokohama 横浜, more central).

Here is the portrait of Commodore Perry, by a japanese artist of that time (did he really look like that?). Note that it was the first time that japanese people would see foreigners after many years, and this opening to the world apparently allowed to forget a lot of preconceived ideas.

Today, if you visit Shimoda, you will be able to make a little cruise on board of (a replica of) one of the famous kuro-fune, and even participate to the “Black Ship Festival” that takes place every year around the third saturday of May.

The drawing below represents the arrival of the seven black ships into the bay of Shimoda. The tightness of the bay and the large extent of the city have made this place the ideal location to allow japanese (still somehow effraid) to control coming and going of the foreigners into their land, while allowing the trade to flourish. 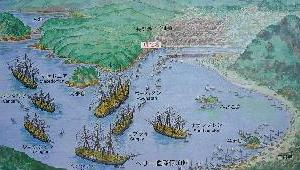