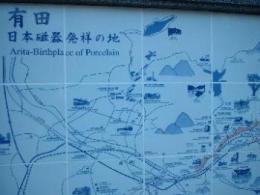 Arita (有田, Saga prefecture) can be considered as the birthplace of porcelain in Japan.

All this started a long time ago, when a man from Korea baked the first white porcelain in Arita, Thereafter, beginning 1600, Dutch people arrived in Nagasaki (neighboring prefecture) and showed a great interest for Arita-ware. Without the Dutch, porcelain artwork would probably never have developed in Arita. Other important influences are owed to China, Germany, and other european countries.

When I visited Kyushu island, I was fortunate to stay a while in Arita, little city that could easily have remained unnoticed, and where I discovered plenty of porcelain shops, witnesses of more than 400 years history of porcelain in Japan.

“Arita-yaki” 有田焼 (literally: baked [porcelain] of Arita), this is how Arita-ware is called in Japanese.