The earth quakes very often in Japan, this is well-known. In fact, earthquakes (jishin, 地震) even happen everyday, but most are unnoticed because they are very weak.

When I experienced my first earthquake in Japan, I was very surprized: I was in a six-floor building, and everything was shaking: windows, partitions, computers… Completely panicked, I was ready to rush under a desk or to put on one of the helmets hanging next to the elevators at each floor. But my collegues seemed not to have even noticed something: they calmly continued working!

Question: what do the Japanese in case of earthquake? Answer: they turn on the radio! Why? To know the magnitude of the earthquake, the location of its epicentre, etc. It is actually not as stupid as it may seem. 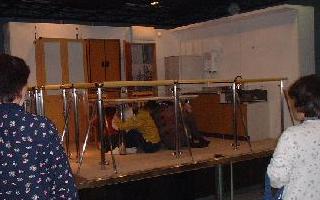 was taken during a training session organized by firemen, to teach the people how to properly react in case of earthquake. This realistic setting features the interior of an appartment, under which powerful engines allow simulating earthquakes up to a magnitude of 5 (quite violent). On the picture, the people are squatting down under the table to protect themselves (so, you see, my reaction was not so stupid! ;) )

Fortunately, although some earthquakes can cause a lot of damage, most of them are reasonable, and Japanese people are very well organized to face them.