Japanese houses are traditionally built from wood, to resist earthquakes.

During an earthquake, while a brick house is likely to be damaged or destroyed, a wooden house will move but not break: wood creaks and squeaks, but the occupants are safe. 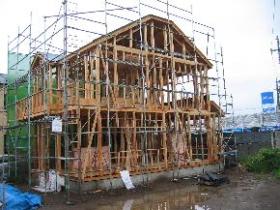 Another advantage of wooden houses is that, being built about 10-15 inches above the ground, they are protected from moisture coming up from the ground. (By the way, it is because japanese houses are raised above the ground that in Japanese, one does not say “come in”, but “climb in” o agari kudasai お上がり下さい when welcoming a host).

Unfortunately, the lack of space 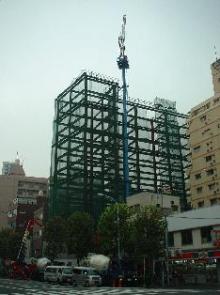 and the large number of people living in the cities do not allow everyone to have his own house. Gigantic buildings are erected (called manshon マンション but with a different meaning than in English). Many Japanese actually prefer to live in a new mansion, fully equipped, with lift and garage, rather than a traditional wooden house.

I am always impressed by the techniques used to build these immense buildings, and by the speed at which they are raised. Apparently, a metallic frame is first assembled, which becomes the building “backbone” and will make it resistent to earthquakes. Then, just “fill up holes” and that’s it! (It is actually a lot of work but this is how it appears when you follow a construction day by day…)