The mochi 餅, a cake made of rice, plays an essential role during the Japanese New Year celebrations.

The mochi is quite a strange kind of food: a sort of cake made of rice dough, quite heavy. Not easy to eat at all: you chew it, it never ends. Fresh mochi is relatively maleable and flexible, but if you leave it for a while, it becomes dry and crispy. 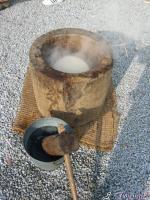 Although mochi are now sold in every supermarket in Japan, and at any time of the year, it nevertheless remains a typical New Year food. While mochi found in stores are little rectangular-shaped blocks, New Year mochi are round-shaped (like a flattened ball) and is therefore commonly called kagami-mochi (鏡餅, literaly “mochi-mirror” because its shape is pretty much like a mirror).

Mochi is made of “overcooked” rice (called mochi-gomé 餅米), which is vigorously battered until it becomes a thick dough. This fabrication process is called mochi-tsuki (餅搗き) , and is traditionally carried out using a big wooden hammer, which is used to beat the rice in a huge bowl hollowed out of a big trunk (see picture). The “mochi making parties” (mochi-tsuki taikai 餅つき大会) are still very common nowadays, organized in schools, clubs or by some companies. 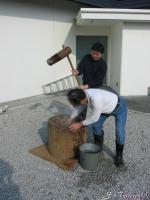 After having poured the overcooked rice (actually steamed rice) in the trunk, men will take the maul in turn to pound the rice. While one is batting, another will use the time when the maul is in the air to quickly knead the hot rice dough. Of course, this requires a perfect synchronization between the batter and the assistant, which is why the audience will often give the rythm, by its cheerful support. 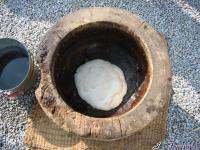 Here is what the mochi looks like after the rice has been pounded. The next step will be to divide the dough, make balls and flatten them to give them their traditional shape. But if they are going to be eaten right away, small balls the size of a mouthfull are fine too.

There are plenty of mochi recipes, really for every taste: 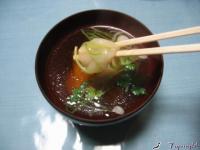