This famous game is extremely widespread in Japan, and not only among the children.

Everybody has heard of the game of “rock paper scissors” (or “scissors paper stone”), because we all played it once we were children. But I have been surprised to realize that the japanese version, called “janken” じゃんけん (or “janken poi” じゃんけんぽい), is not only more elaborated, but also used in some situations I never had thought about.

The rules are basically the same as ours: all the players shout together “jan-ken-poi!”, and on “poi!”, everyone shows a sign with one hand, among the following:

Let’s mention that gû, choki and pâ do not literally mean “rock”, “scissors” and “paper” but are kinds of onomatopoeias: (gu means “hold tight”, choki-choki reminds the sound of scissors, and pa means “suddenly, at once” –because one opens one’s hand suddenly).

The game of janken-poi has a lot of variations, the most common one being aikodesho (あいこでしょ): when on jan-ken-poi, all players happen to show the same element, they would then shout “aiko-de-sho!” and show another sign. Aikode-sho goes on until one (or more) winners come out.

Other variations are more complex, like janken-poi-poi (where each player shows two signs consecutively, and may then change one and remove one), not mentioning the sang variations and those involving punishments… and this list is not exhaustive.

Not only a children game 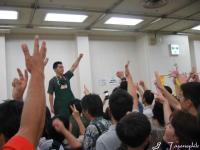 But the most funny thing, is that in Japan, the “rock-paper-scissors” game is not only played by children. A while ago, I went to a factory sale of outdoor gears. The shop proposed a limited number of items at a very low price. However, the stock was very limited and a lot of people were interested to buy, so the clerk announced that the items would be sold in priority to the winners… of a “janken” game! I wondered how they would manage to play rock paper scissors with so many people. But the Japanese are quite used to this kind of selection, and it didn’t take long for some people to come out of the lot. They would all shout: JAN-KEN-POI!!!, and those who showed a sign stronger than what the clerk was showing, would remain. After having repeated this a couple of times, only 3 or 4 people remained, who were allowed to buy the discounted items. But what stunned me the most, is that no one would cheat (it would have been so easy). This shows once again the sense of integrity (sense of honor) of the Japanese.

Another strange story. I have been told that a game of “janken” had once decided the future of three students. They were fresh graduates, and looking for their first employment. They were from the same lab and wanted to apply for a job in the same big company. Now it is common in Japan, that universities “recommends” some (very good) students to the big companies, to simplify the new graduate selection process. However, since there was only one vacant position and the grades of the students did not allow to choose one of them, they let their future be decided by… a game of “janken”!.

Seems crazy? Anyway, if you are to let the fortune tell, better a game of “janken” than an amida-kuji, don’t you think so?