The Tama 多摩 region in Western Tokyo is the birthplace of the shinsen-gumi 新選組, an armed gang fully dedicated to let the “true justice” be respected.

The story of the shinsen-gumi (literal meaning: “team of the new elected”) started about 140 ago, in the Kanto plain, nearby the Tama river (Tama-gawa). A group of young men and women who dreamed becoming samurai one day, but knew this privilege was reserved to a cast of people, went to see the Shogun in Kyoto, and told him their ideal: to protect the bakufu (the shogun’s government) and to let the “true justice” reign (makoto no gi 誠の義). This initiative was welcomed by the shogun, who recognized this group of young people: the shinsen-gumi was born! 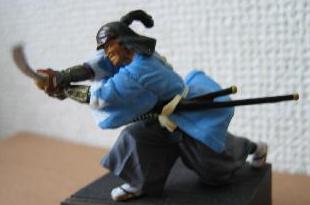 Fully devoted to their master, the new heros patrol everywere and severely punish those who dare disobey! It is also during that period, that black ships come all the way from America, and that Japan starts opening to the outside world. The shinsen-gumi is very busy!

However, the story ends up awkwardly, when Kyoto’s shogun is overthrown (1867) and the emperor in Tokyo takes over the power. Our brave defenders of the country are now considered as rebels and are forced to run away.

The _shinsen-gumi story is quite popular, thanks to the TV series broadcast on NHK, which relates this marvellous adventure!_